Lawson’s Assembly of God church movement began in the early 1940’s when occasional meetings were held in the old Electric Theater build­ing, on the east side of Pennsylvania across from the city park, under the leadership of the Reverend Oney of Excelsior Springs.

On May 4, 1943, this group bought a church building formerly occupied by a disbanded Baptist congregation. In 1946, they enlarged and improved its basement and in 1948, they bought a house and moved it to the church lot for a parsonage. 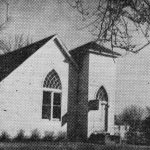 The church was having two services each Sunday and prayer services on Wednesday evening.

The need for more room and better facilities became strongly apparent. On June 19, 1963, they purchased five acres from t

he late Monroe Teegarden, on the south side of Hwy D at the west edge of town. Work on the new church began on April 1, 1964 with ‘Doc’ Cates operating the bulldozer, excavating for its basement. Despite many setbacks, with the help of much donated labor, the building was completed and ready for occupation by January 10, 1965.

The new church had six classrooms, a pastor’s study, a fellowship hall, a kitchen, nursery, a sanctuary that seated 165, and was centrally air conditioned. In 1968 a parsonage was built at the southeast corner of the church property.

On January 6, 1975 the church became a General Not for Profit Corporation