In 1880 that group erected their first church on the southeast corner of Fifth and Pennsylvania. When that church burned in 1890, the Christian Church let them use their building until the new Baptist church was com­pleted in 1892. It was located on the south half of two lots just below Sixth street, on the east side of Doniphan.

This congregation was quite active for many years, but deaths and relocations caused the church to disband. Several years later, the Assembly of God congregation took it over for a number of years, until they could build a new one.

After several meetings of surrounding Baptist groups in 1956 and 1957 it was decided that Lawson needed another Baptist Church. Pisgah Baptist Church was chosen to sponsor the mis­sionary endeavor.

The first meeting was held in the V.F.W. hall across the park on Third Street on May 12, 1957, which happened to be Mother’s Day. Forty-eight were present from Lawson for that meeting and there were twenty at the prayer meeting held on the following Wednes­day evening.

Once organized, the new body’s first official act was to call Harry L. Morris as pastor and he preached his first sermon on August 4. The group was constituted as a church on October 13, 1957 with 33 charter members.

On July 20, 1958 its trustees were instructed to secure an option on the A.J. Watkins property at the cor­ner of Third and Ingles as a site for the Educational building. It was to be used as a church until a permanent church could be financed. Meantime, the two story residence on the site could be used as a parsonage.

Groundbreaking services for the Education wing were held on July 30, 1958. On December 1, 1958, services were first held in the building before the second story interior work was finished. By eleven o’clock on the Christmas Eve morning of that year, the last construction work was completed.

On February 17, 1960 the church’s auxiliaries held their first meeting and on November 2, 1958 the first deacon was ordained.

In subsequent years much work was done in the educational wing including building partitions on the second floor, installing rest rooms and drinking fountains, and work in the basement. A new mimeograph machine was purchased. By July of 1964, the church purchased a parsonage located at 536 East Fifth Street.

In Sep­tember 1965 they voted to secure plans and raise funds for the building of a permanent church sanc­tuary. The building plans were approved early in 1966 and groundbreaking started in March. The first services were held in the new building on July 17, 1966 and the church’s dedicatory service was held on April 12, 1967.

In 1968 two rooms were partitioned off on the first floor of the educational building as a pastoral study and an office area. The church joined CAVE program in February of 1969, making it possible to lease a movie projector and to secure films much below cost for showing.

Lawson Baptist Church became a General Not for Profit Corporation on March 22, 1982 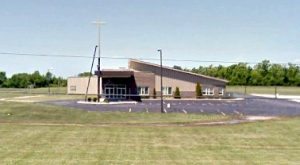