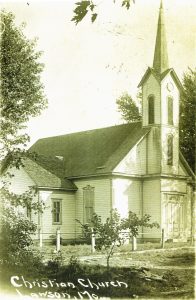 The Christian church began with a meeting that opened in Lawson during the Christmas season of 1881, a series of services primarily sponsored by several members of other Christian Churches. The Rever­end J. W. Tate, of Edgerton, delivered the sermons, inspiring many to confess their faith and on January 29, 1882, Rev. Tate organized the group as the Lawson Christian Church.

The organization had a char­ter roll of 75. Its first officers were Elders Palmer, Hubbard, and Grossman and Deacons Miller, Vivian, and Rhodus. These men immediately began planning for the building of a church building. Meantime, the group continued to worship in the original Baptist building on north Pennsylvania Avenue.

A building site was purchased from George Montgomery in the newly platted Montgomery Addition, located on the east side of Raum Street, between Fourth and Fifth. The building that was constructed in the next eighteen months was 24 foot by 48 foot and faced west. It was constructed with a lot of member labor and materials from lands held by the original church members. The basic timbers were from logs that were donated and sawn at the Watkins Mill. The foundation stones came off the Chester Bethel farm, west of town, and the labor of laying them was contributed by Irvin and Overton Rhodus, master stone masons. Others skilled in carpentry took over the structural part.

The Reverend Tate, who served the church for two years, preached the dedicatory address on August 4, 1883.

During Joseph Lowe’s ministry, a highly successful meeting was held in the new church under the leadership of his brother, Samuel Lowe. (This man later organized and ran the Plattsburg Jeffer­sonian, an important northwest Missouri newspaper of that time.)

The Sunday School was organized in 1885, by A. I. Myhr, an evangelist who specialized in just such work. A. W. Gross, its first superintendent, served in that office for sixteen years. Fannie Palmer was the first secretary.

The first Christmas program was held in 1887, and Children’s Day was observed the following summer. That fall, the school made its first donation to foreign missions. By 1894, there was an average attendance of forty which was maintained for several years.

The local Christian church held successful revival meet­ings which helped increase the membership. Over the years new members were gathered from disbanded churches including old Greenville’s church, Oakland Church of dying Haynesville, and the Christian Church of old “Slip Up”.

With the additional membership a larger church was needed. A small gabled addition was built half way along the north wall of the Christian building, and a much deeper and wider one on the south side.  The cost of construction and complete relocation of the pulpit and stained glass windows had been high so the purchase of pews was delayed until 1897. The church was rededi­cated on December 13, 1896 by The Reverend Gantz.

The Christian Endeavor, organized in the early 1900’s was an excellent training ground for the youth of the town for many years and was also an important social gathering.

In 1910 Judge Gross donated a piano, as a memorial to his recently deceased son. Doctor and Mrs. J. H. Roney gave an individual commun­ion service. A central heating plant was in­stalled, as well as a baptistry, and cistern.

In 1934 the velvet portieres back of the pulpit were added, giving a homey touch to the already pleasant auditorium, and this was enhanced in 1947 by the addition of two pictures of Christ on either side of the rostrum. The church had its kitchen in the building’s south wing but gathered funds to build an addi­tion for that purpose. New light fixtures were installed and the ceiling insulated. The outside of the building was painted and a comfort station built in the back yard. The old bell stood on a sturdy platform in the side yard because its weight in the steeple was judged hazardous.

In 1953, the women of the Lawson Christian church sponsored the publication of FROM ENTRY FEE TO FIFTY THREE: A History of Lawson’s Three County Com­munity, a book written to commemorate the seventieth anniversary of the church building’s first dedication. During the open house held on August 2, 1953, each church of the town and community had a place on the program. Copies of the book were presented to Mrs. Oscar Zimmerman, sole surviving charter member, and Mrs. Baxter Waters, widow of the church’s long time minister.

The proceeds brought in by the sale of the above publication allowed the church women to contribute substantially to the funds needed for the furnace bought that same fall. A decision was made to enlarge the basement area under the church and to add an addition of a church school room at the southeast corner. After city water came, making better kitchen facilities possible, fellowship dinners were held in the basement area.

The church joined the Pension Plan in 1953.

In 1956, the church women put on a style show entitled: The Wheel of Fashion. It covered the years between 1880 and the flapper period of the 1920’s. Young people of the whole town took part in it, both by modeling and by singing the many songs included in that musical type presentation.

James and Marie McKee started a trust fund for the church in memory of their mother, Nellie Roney McKee, in 1958. That same year, the church bought a Baldwin organ, and employed Melba Sharp as choir director. Rev. Noel T. Adams was the first minister to live the parsonage that was bought in 1958.

In the fall of 1969 the Christians and Presbyterians joined to become the United Christian-Presbyterian Church. James Beaumont, minister of the Christian Church since the fall of 1967, was called to be the new pastor. In moving to its more modern, larger building, the Christians took along the public address system Mr. and Mrs. Alvin Rhodus had given, memorial chimes given by Mr. and Mrs. Harry Southwick, in memory of their son Harold, who died in World War II, three pulpit chairs, the new communion set given by Mr. and Mrs. Roy Roberts, collection plates given in memory of John H. Roney, Jr., long time secretary-treasurer of the official board, several pictures, one of which was presented by Mary Kneller Wille, song books, music files, fellowship hall equipment, and a new $2,000 organ, bought with money willed by Bess Riggs Jones, as a memorial to the Nathaniel Riggs family.

Ministers of the Christian Church