A School district was organized in Lawson in 1871, immediately after the town’s incorporation. Classes started that August, in a house on the southwest corner of Third and Doniphan, and continued through November. Fifteen year old Lutie Palmer taught that first term for twenty-five dollars per month. She paid twelve dollars of this for room and board because her widowed father, Dr. Palmer, had not yet built his house at Fourth and Raum. He had been practicing in Lawson for some months but had not yet moved his family here from Liberty, where his wife had recently died.

Only twenty students were enrolled that first term but within a short time more children were moving into town and others were reaching school age.

In August 1872 more space was needed so another classroom was opened in a house that then stood on the site of Morrow’s Lumberyard on the west side of Pennsylvania between Fourth and Fifth. Lena Titus Smith, whose parents moved in from the Union neighborhood when she was quite small, taught the primary classes in this second building. Other early teachers were the Misses May Pickering, Sally Hunt, and Susan Hollingsworth.

Classes for the town’s negro children opened in Lawson’s first school room in August 1874. Later the school was moved to a building that stood at the back of two lots just north of the railroad right of way, lot 5 of which, in Block 7 of the original town plat, borders on Doniphan. For many years this area was known as the Johnson Property because Miss Dessie Johnson of said family lived on there after her teaching job. The school included some high school subjects. It closed for lack of students in 1906. During years that it was included in the Lawson system, the school’s enrollment fluctuated between eight and twenty five.

By 1899, the district had built a partition across that second story room, adding more space for high school, and hired another teacher.

The school burned down in the late 1890s

Staff and class space increased again when a two room wing was added. A storm damaged the brick school and flattened one wall of the new wing while under construction.

A $5,000 bond issue was approved to pay for a necessary addition to the public school building.

The School burned down again about 1912. It was rebuilt and opened again in 1915.

The school was rebuilt and opened again in 1915.

By the time the 1915 building was in operation, a standard four year high school was in effect, and the district was em­ploying six teachers.

After reorganizing in 1918, the faculty increased to eight.

In 1921 East Fork and a part of Riggs district were added and the Junior-Senior High School plan was adopted.

In January 1925 Anabel Smith rated first in mentality tests given to students from 175 high schools of Missouri, a group that included the four largest cities of the state. It was decidedly an accomplishment for the community.

In 1931 free text books were voted in for the schools

March 11, 1936, Lawson’s first teacher, Lutie Palmer, died and was laid to rest in the Lawson cemetery after a lifetime spent in her chosen profession. 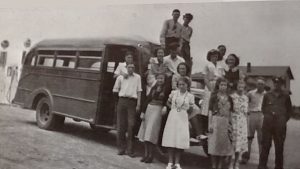 Senate Bill 307 passed in 1948 creating great changes in the educa­tional set up in Missouri. It specified that the system was to be reorganized and was to be administered by elective county boards.

In June 1949 ten acres of land on the north side of Sixth street were bought for an athletic field.

The years ahead saw many changes in the Lawson school community because of the reorganization. Lawson’s 1949 enrollment of 205 climbed to 222 by the following year and there was a staff of nine teachers. Graham district voted annexation to Lawson in December of 1949.

By this time in addition to Commerce which had been taught for some time, Home Economics and Music had also been added along with an expanding Athletic program.

A gymnasium-auditorium extension was built on at the building’s east end, providing for hot lunch space, and indoor basketball games. The new wing and a soon to be com­pleted stadium field area a little north of the building became decided assets to the whole community.

In January 1950 Murray and Bisbee districts were annexed into the Lawson district.

The district was re­organized as Lawson R-IV.

The district grew still more in 1957 when Elmira was annexed.

In January 1958 fifteen acres of land north of the athletic field was purchased as the site for a separate high school building.

By September 1959 the new high school was occupied.

For the first time the school at Fourth and Allison had only elementary classes during the 1959-1960 school year.

Kitchen space was added to the high school in 1960.

The eastern part of Pleasant Grove was annexed into the Lawson district in 1964.

At the time of district reorganization in May of 1967 the name changed to Lawson R-XII District:

Franklin and a part of Rayville were added to Lawson district in 1967.

In July of 1968, increased fall enrollments prompted passage of a bond issue of $310,000 for the purpose of erecting a second elementary school building in the town. During the term just ended, one class had occupied a room in the Presbyterian Church’s new educational building. The fall of 1968 saw two more having classes in the Baptist church’s educational quarters.

Kindergarten, First, Second, and Third grades were held in the new Southwest Elementary building on the opening day of school in 1969.

In December 1969, the U.S. Government’s General Services Administration approved the transfer of the south half of Lawson’s former Nike base to the Lawson School District.

The opening of school in the fall of 1970 found the administration building of renovated Nike base for school purposes, and the kindergarten department holding classes there. As enrollment demands, other classes also met there in what was called the Southeast Elementary building.

School officials forecasted the need for additional classrooms at Southeast Elementary. The one renovated building at the former Nike Missile Base had eased the situation somewhat but it seemed likely that remodeling of another building was eminent.

Lawson School District was the first to gain Exemplary Rating in the State of Missouri, having earned that distinction in 1993. (2017 Comp plan)